A couple of years ago, a tv program that claimed itself to be a reality show carelessly, and unknowingly to many, made a “fatal” mistake. Every episode of the show that was hosted by two celebrities told about a guest’s search for a missing family member. On this particular episode, as it went by, the missing person – the guest’s husband – was detected staying in a famous 3-star hotel chain. The hosts and the guest rushed to the hotel to investigate and were met by the receptionist. Asked about the man’s whereabouts, the silly receptionist said:

Mam, your husband is staying with us, but he’s out at the moment.

Whether the poor woman finally found the culprit or not is not the concern here, but if you travel a lot and stay in a hotel during your trip, or if you are a hotelier like me, your common sense would have suddenly detected something weird in the receptionist’s remark. Hotel staffs are not supposed to release information about their guests under most circumstances. I hope I could tag reality show producers and get them to be more responsible (and resourceful!) so that they don’t send wrong messages to wide audience.

Then again, today, I happened to read my timeline on Twitter where I found the Twitter admin of a big 5 star hotel in Jakarta tweeted names of their VIP guests with warm, cheerful welcoming statements. By doing so, I know that this hotel PR was trying to make a positive image of the hotel – because they are capable of hosting these hot shots – but, at the expense of the guests’ privacy? How could a PR (at an international hotel brand) have lost it? I hope nobody sues anyone after that.

Some hotels make guest privacy notion very clear in writing.  They even make new employees sign an agreement that under no circumstances can they release information about their guests to a third party, even when this third party claims to be a guest’s mother. Jeopardy of privacy can result in expulsion. Some other hotels are not very strict in putting their regulations in words, and they must have been lucky so far if they have not been put in trouble because of this absence. However, privacy policy is some kind of basic agreed rule among hoteliers. At the absence of a supervisor, use your common sense when you have to make a quick decision. I personally think that it doesn’t take much to decide not to release any information about my guests to anyone, especially in social media. Because the consequence is too frightening to face, should things go wrong.

Working in the operational side also allows you to see things from the perspective of a guest. An ambassador checked in on one day with his lovely wife, and with his lady friend on another day. A world-famous illusionist who wished to have a short break from controversy. Or simply anyone who wanted secrecy for reasons we may not need to know. Isn’t that something we sometimes need, too? There’s less and less space for privacy nowadays, thanks to new gadgets and social media. How do you feel when you pay a hotel dearly in order to “disappear” only to find that they betray your trust?

If you believe – like I do – that nature by her signs tells you what’s right and wrong, you’ll also believe that there’s a tattoo that’s meant to be. On last Wednesday Stephen Lomax, the boss of the theatre, proudly showed me a new full color tattoo of a big cross on his left chest. “My friend, Komang, did the work,” he said. Three days later, Komang did a beautiful phoenix tattoo on my back. 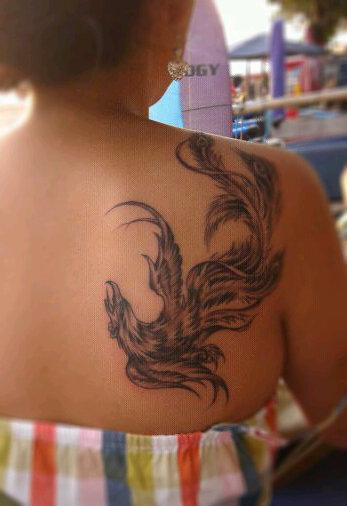 In my earlier post I wrote that all Indonesian tattoo artists are these dark-skinned, morose, cigarette junkies with tattoos of various kinds adorning their skins. Komang is fair skinned, shy, (not seen smoking while I was there for 2.5 hours), and tattoo-free. “I can’t bear the pain,” he said.

Despite the ‘guy’ stink that comes from his shirt, I found Komang impressive. Not just because he made time for me (knowing that I was Stephen’s friend), turning down a request of an Australian couple who paid him a visit for a tattoo. The mid-thirty guy holds a diploma in Visual Art and is a gifted illustrator. Prior to that day, I spoke to him over the phone that I didn’t want my phoenix to be like those images generated by Google when you typed ‘phoenix tattoo’, or a phoenix that looked like a rooster. Then he made three designs for me to choose from. I instantly knew the one in the bottom was mine.

Komang’s studio “Mega Tattoo” is located behind Matahari Kuta Square, Kuta, Bali. Even if it’s somehow true that many tattoo studios in Kuta are annoyingly commercial (money first, art second), well, Komang is definitely an exception! (He even used two different needles on me to create certain effects – both were new, of course!)

It’s got to be a phoenix for me. I was ‘dead’ once or twice in this life, so to speak, and a phoenix bird is a mythological creature that symbolizes revival. I feel a strong connection with this creature, spiritually speaking.

The other reason is very dear to me. My daughter has a middle name ‘Paksindra’ and there’s a spiritual story behind it. A few weeks before I found out that I was pregnant, a bird came to our place and stayed in our room for about ten days. The bird’s tail was featherless. I fed her (or him) with rice every day, and on the tenth day when she flew out and never came back, she got her tail feathers back. Months after that, when I was obviously baby bumped, a spiritual friend told us to give our daughter ‘Paksindra’ – bird from heaven – as her middle name. Paksindra. That phoenix is also a symbol of my love to my daughter.

My 13-year old was ecstatic when I told her about my new tat. “I want to make one when I’m older,” she said. “Does it hurt?” Oh, yes! I said. But if you’ve given birth before, this is nothing.

What else should I tell you if you want to make a tattoo?

"You gotta dig deep and come out dirty."